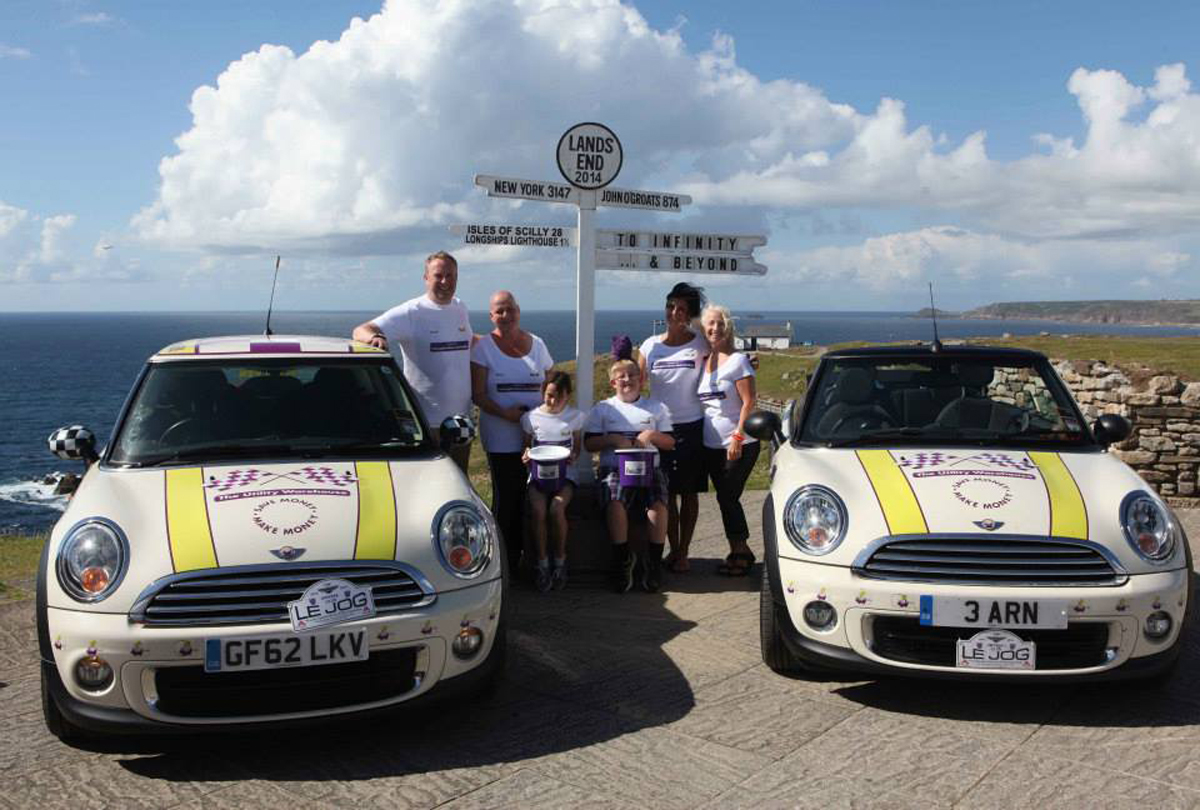 Her nearest training was 6 hours drive away, and forget Pizza Tuesday – she had to invent her own when the Pizza Van came to town… and no UW Mini’s had ever been that far North!

Very sadly Mairi found out she had only a short time left to live after contracting lung cancer. She bravely continued to grow her UW business – Something to leave a legacy for her two children Hannah & Niall.

After coming all the way to Slough near London for Wes’s Kick Off in January 2014 and a short moving appearance on stage by Mairi, a few distributors decided to run a very special One-Off rally between Land’s End & John O’ Groats to help Mairi achieve her dream of having UW Mini’s up in her town and help her to get to TL.

The date was set for July 2014. Mairi and her children flew down to London and were picked up from NHQ by David Long in a UW Mini.  They set off to Land’s End to meet up with another Mini driven by Corrie Nairn and co-driver Jennifer Smith.

The weather was fantastic and after the traditional photos at the landmark signpost and an ice-cream or two, we set off heading North. Our first stop in Devon at a lodge, very kindly donated for the occasion by a UW Distributor (need his name here). The next day we set off early and made great progress all the way up North to Penrith for our 2nd overnight stop.

The following day we made further great progress … no traffic jams! We soon found ourselves North of the border and into Scotland. To cut a long story short we drove and drove up to Bridge of Allan for a lovely cream tea, keeping on the A9, through the Cairngorms onto Inverness for a meet up with other UW distributors.
We then decided that we could make it all the way before dark so sticking to the A9 along the fabulous East coast… we made it to Mairi’s home just after dark.

The next morning we drove to John O’ Groats and took the photographs at the other landmark signpost on another fantastic sunny day, and celebrated with ice creams and bubbles!
But, Mairi was not finished after the exhausting journey!  The Olympic torch procession was in her local town that day and had brought big crowds! So, we all decided to promote UW with the 2 UW Mini’s and hold an impromptu ‘COP’ in the local cinema to help grow her business and raise awareness.

In the November of the same year, Mairi sadly lost her battle with Cancer.   But, her legacy lives on and she made TL shortly afterwards.

It was a fantastic trip and highly recommended, if you ever want to follow in our wheel tracts – trust me you won’t regret it.